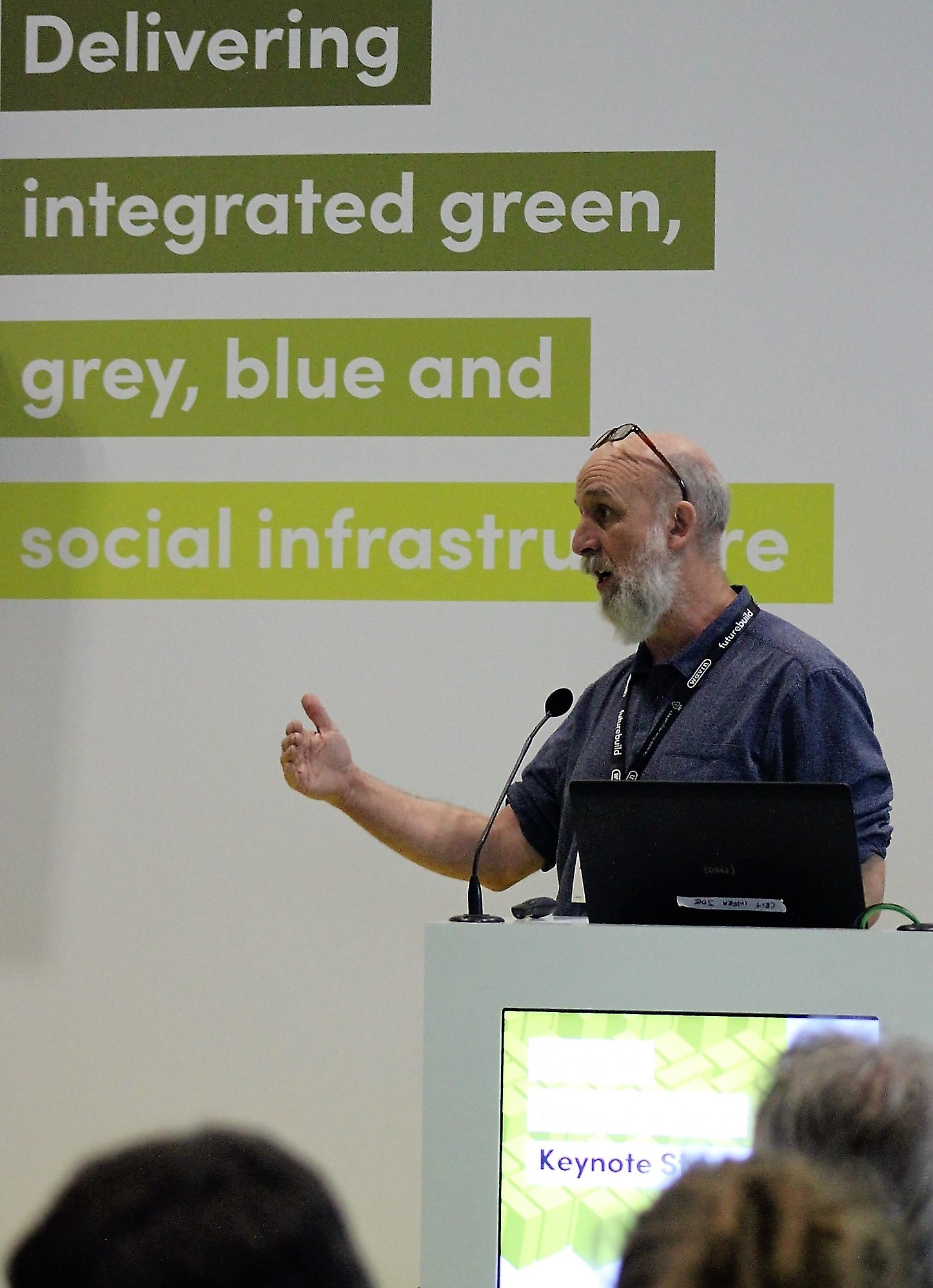 Just days before the global Covid-19 pandemic brought the UK to a standstill, Arc’s Ian Boyd spoke at Futurebuild 2020 on the inevitable public health emergency coming to the fore as we consistently fail to design healthy places for people and wildlife. Futurebuild’s theme was ‘Climate Change – Responding to the Emergency’, and yet there appeared to be (and still does) no clear industry alignment between climate emergency, biodiversity loss and the public health agenda. Meanwhile, recent surveys of UK developments conclude that 75% of new development is of poor quality and at the time of writing, the Futurebuild venue itself, ExCel London has become the 4000-bed NHS Nightingale Hospital. 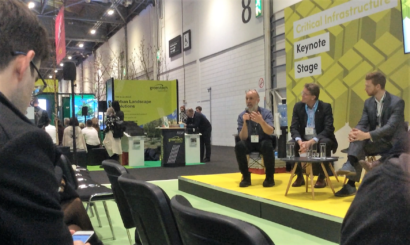 You can catch the Planning for Resilience debate including Ian’s speech now here on Colab (and listen out for the crashing seriousness of the scene set by Alistair Mant from UK Green Building Council).  Alternatively, head to our short but wobbly video on our Arc YouTube channel or read this handy transcript below. So please, let’s not go back to ‘building as usual’. Make your lockdown learning count and join us, post-Coronavirus, in shaping better places and planning for a truly resilient future.

Can we just stop building places in order to maintain them?! Let’s build things to enjoy them, and build things that sustain our way of life, and the natural world at the same time. By thinking ecologically, we can deliver better, healthier places for people.

Arc are most interested in a resilience conversation that combines ecological functionality with human well-being – in the same place at the same time. We’re talking about synthetic ecosystems in the urban environment which have multiple benefits. And because we work in ecological compliance, we provide those services to the industry, but also do place-based regeneration work for local authorities, we think about the development that we advise on and contribute to as all about habitats for humans. We work a lot with local biological record associations and organisations. The Isle of Wight has 7000 species. Actually it doesn’t… it has 7001. Because we miss ourselves out of that list, every single time.

We are broadly speaking, medium-sized social mammals but we’re exceptionally bad at building habitats for ourselves. We do it extraordinarily badly and that’s often because the design approach that is taken, not always and not only volume house-building, misses out people. It’s not that interested in the quality of life of the inhabitant. It’s interested in the efficacy of getting through the planning process as quickly as possible.  But the quality of life is a fundamental resilience conversation; if we’re building places that make people ill and we are, what possible hope do we have for a resilient future? If it’s just hard enough to get through your day and the place where you live or work makes it harder, how can we possibly expect to help individuals and communities have resilient responses to socio-economic shock and climate challenge ahead? It’s simply impossible. We have to think about the functionality of the places that we live in as habitats for humans and integrate an ecological approach alongside our built and planning approach.  And we can plan for this… 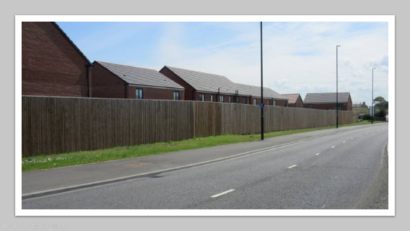 This image is taken from the Place Alliance, from their audit this year on the housing stock of the UK and it is absolutely shocking. Their conclusion was that the majority, not just a bit but most of housing that is built is poor quality. That is just unbelievable. I’m not trying to demonise this place and it’s from their report but this is just the perfect example of how we build places in order to maintain them… you just know that that place is built for efficiency of maintenance and nothing to do with quality of life at all.  All it wants to hear is the sound of mowers every two weeks. It’s not interested in birdsong.

We are building places to maintain, and we are missing out life in between entirely. It’s absolutely insane and we are just storing up problems and issues, we’re making it harder and harder and harder to respond to the challenges that are coming our way in the environments that we create for ourselves. It makes no sense at all.

Instead of which, we just need to find an ecological approach that provides healthy places where we can thrive and as a community come up with the sort of responses that we are going to have to negotiate …. and at the same time, make room for the natural world. It is a holistic ecological approach to the built environment for people and wildlife at the same time. It sounds fanciful. It simply isn’t. Using ecological leverage to make better places for people, is a planning tool for resilience and we’re not using it.  And the reason that we’re not using it is that there are no public health tools.

In the 1970s, 50 years ago, there was a discipline called human ecology. It existed. There were people like Lewis Mumford, people like Forest Stearns, a heroic urban ecologist from the United States.  All you need to know is in this single paragraph… 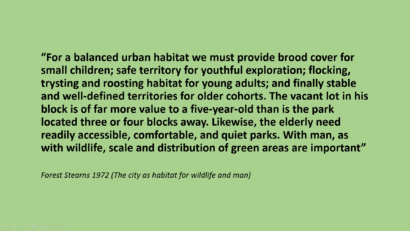 It is simply perfect because it describes designing habitats for human beings. And if we followed that list of instructions in an imaginative and creative way, we would be building the places that we are not building now. The Place Alliance audit would not be saying the things that it has just said. Because we have forgotten this. Somehow human ecology has evaporated entirely. It does not exist. We have to have it back. We knew how to do it. We forgot how to do it. This is not rocket science, it is not complicated… it is simple, it is straightforward… we just need to get on and do it.

Our approach to that is to think about building features that are useful for wildlife; so that they have an ecological function that is useful in terms of mitigation, enhancement, net gain and all the policy drivers that we are talking about but they have a public realm function, they have a decorative function and they have an aesthetic appeal. How can we incorporate ecological value into the built places where people live, in such a way that it improves the lives of people too?  Of course, we have to be careful. We can’t drag wildlife into an ecological sink and destroy it with cats which is a risk. But we are sophisticated mammals. We can do this. We can design ways of bringing wildlife into the human domain that is good for wildlife because it’s good for people. These are not exclusive missions, they are the same mission. 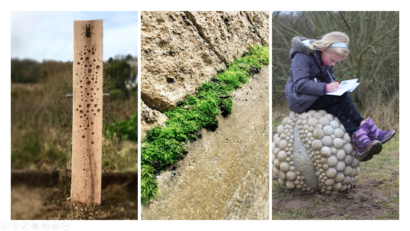 Now we are ecologists fundamentally. The leverage we have over the built domain is ecological. Wildlife policy and law terrifies developers. You say dormouse, they’re horrified… you say newt, they faint!  This is our job, because we do not have public health tools available to us.  Why is that?! There is such a thing as a public health assessment, have you ever seen one?  I’ve never seen one! I’ve never encountered one. Ever. But it does exist. Why do we not have the health community contributing to the debate about the design of places in planning?  I’ve never once seen a response in that way.  But we can use wildlife law to make better places for people. If we design a place that is good for dormice that generates the best informal play area that you can imagine, then we’re doing a good job. We’re using the leverage that we have at the time that we have it.  This is going to align…. human health, ecological health, environmental health will align in policy at some point. Wales already has a Future Generations Act… it’s coming our way.  But in the meantime, we have to use the ecological tools that we have.  So, using protected species to produce better places for people – that’s exactly what we should be doing. 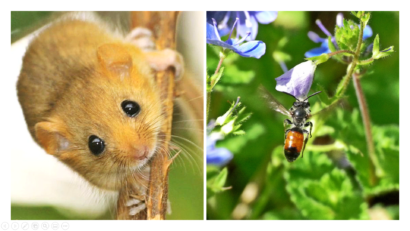 Our obsession with pollinators is wonderful. This beautiful thing (above right) is Andrena Labiata, a ground-nesting bee that feeds on Germander speedwell. We can make that happen. We can create habitats for that. But in doing so, we have to enliven and enrich the public spaces for people which makes more resilient, healthier places to live. So, we’re talking about using ecological tools to deliver human health and well-being. We are integrating ecology and human health.

This approach fits into every part of the urban resilience debate. By using an ecological approach in the human realm that draws in the natural world as policy drivers demand of us, we’re anticipating the next resilience discussion which is a human well-being discussion. 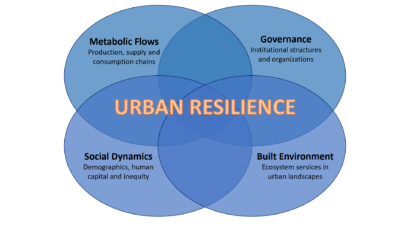 Every part of this chart, thinking about ecological value in the built environment delivers a better place for people. It has a carbon function too. An example of how this can work in totality? I have worked on sites, and I’m sure many of you are familiar with a cut and fill development on a steep slope, where we will see a developer happily spend £50,000, £100,000 on carting off material to leave a perfectly flat, abysmally boring, dismal green thing that no one wants, and call it done. We see developable space sacrificed for spurious ecological gain that wildlife doesn’t want, that just perpetuates urban sprawl. It’s inefficient, it’s expensive, it’s wasteful. What if you kept all that material on site and built a wonderful, lumpy, informal space. You didn’t call it a play area but you know it will become one. It is full of hot spots, dry spots, plateaus, slopes, voids, hollows… it will be full of wildlife and people will encounter it because they will be there. They’ll be using it. Put a seat next to it, make it something special. Now the first thing you’re going to hear is ‘how are we going to maintain it?’. I don’t care!  I do not care.  Because there will be a way to maintain it. Can we just stop with building things to maintain them? Let’s build things to enjoy them, and build things that sustain our way of life, and the natural world at the same time. By thinking ecologically, we can deliver better places for people.

Our approach which is called Shaping Better Places, focuses precisely on that agenda… taking an ecological approach for the natural world and the human world at the same time in the same place. 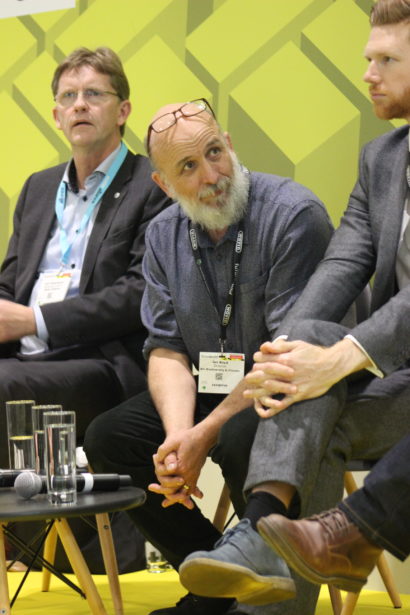